Hey friends! Happy Marathon Monday to you! It’s Boston Marathon day and I have been glued to the screen literally ALL morning long. It’s my favorite race day of the year, despite never even coming close to being qualified to run those 26.2 miles! I absolutely love seeing those runners toe the line and put it all out there for some seriously impressive fast finishes! If you were a runner out there today in Boston, just know I was at home cheering you on all along the way! Way to go!! If you’re a dreamer like me, maybe one day we can run it together! Deal?

Can I just tell you that this past week was pure insanity? Because it was. That’s why I’ve been so MIA on the blog this week.

If you were wondering!

😉 Let’s just go ahead and rewind back to early last week.

Oh and be sure to catch all of these photos as they come to life over on the vlog too for our weekly update, here:

I’ll fill you in on the good part first because it’s a lot happier of a place to start! 😉

We got the backsplash tiles put in and now they’re just awaiting their grout! Nick also installed under cabinet lighting and it makes ALL the difference. Seriously, if you’ve ever considered adding lighting under your cabinets, DO IT! It’s a huge update and you can do it on a budget! I’ve always wanted to use subway tile or a form of it and this beveled white tile from Lowe’s is so perfect! It’s clean but also has extra detail with the edges and adds just enough character to the kitchen. I absolutely love how the kitchen is turning out! It may be my favorite one that we’ve done yet. 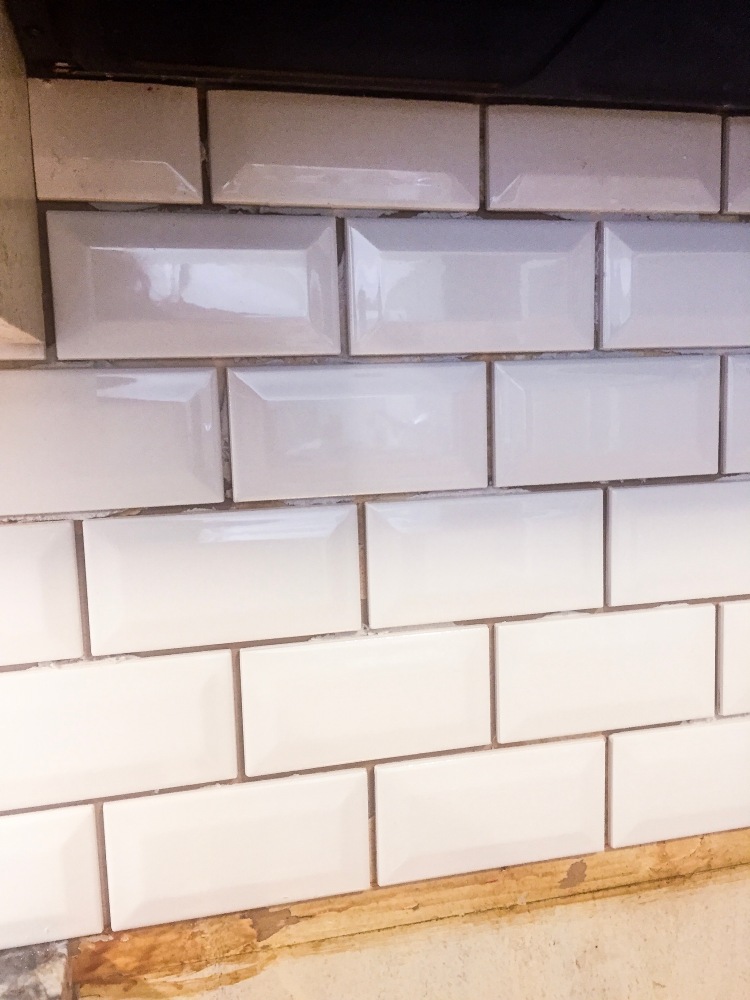 We also got our outdoor lighting put up too! These light fixtures are a huge update as the older ones were tiny, dirty and did absolutely nothing for the front porch area. So, we knew we wanted to go bigger, darker and a lot classier with updated ones. These are from Lowe’s and ran us about $90 each but were totally worth the price! We’re big sticklers for updating the exterior just as nice as the inside, and lighting makes a big difference when it comes to curb appeal, in our opinion! So, these were a major win on the #culdesaccutie! 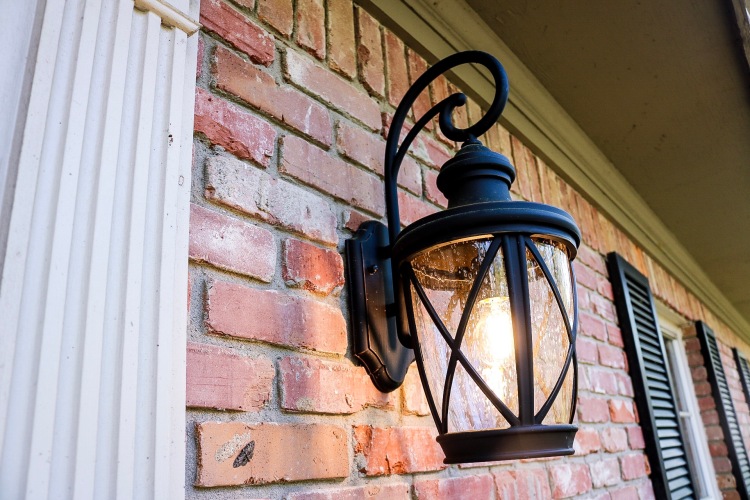 We also started camping out in the dining room as we’re waiting for the carpet to get installed upstairs. Welcome to our humble flip life world! 😉 We’ve had to do this in just about every house as floors have always needed to be updated in a major way for the homes we’ve purchased. So, it wasn’t new to us and of course–it’s only temporary so we’re just calling the dining room our bedroom for a few days. It works!

We faced our biggest fear and our biggest challenge in flipping houses on Thursday and it hit us like a ton of bricks. If you saw my Instagram story earlier last week, you probably saw this update:

Nick made great progress on our flooring downstairs…but they sure didn’t last very long. Remember how we just moved in and needed this house to be pretty liveable for us as it’s our “temporary” home? We needed to have all of our flooring laid downstairs so that we could install our kitchen appliances, like the refrigerator, range, and washer/dryer. (Ya know…basic home necessities.) So, Nick got all the way through the front entryway, front sitting room, dining room, and a few pieces into the kitchen before disaster hit us…

We woke up Thursday morning thinking we were going to potentially have the downstairs flooring completed by the end of the day, which meant we would have a fully functioning kitchen and life would be 10x better.

Well…..turns out we were VERY wrong.

I woke up and let the dogs out as usual and noticed all over the flooring in the front entryway by the bathroom. So, I woke Nick up right away and told him we had something really bad happening but I wasn’t 100% sure what it was. I may or may not have had tears running down my face because I KNEW it wasn’t good. He hopped out of bed faster than ever before and we realized we had a huge plumbing emergency on our hands. A few weeks ago, he gutted the bathroom and removed everything, including the toilet from that half bath downstairs. Well, our sewage pipes had an apparent blockage and water came up from the hole (which was sealed but apparently not enough) where the toilet was previously. Yeah…just as gross as you’d think. Water was literally EVERYWHERE surrounding that half bath. Talk about serious panic.

It was emergency-city for us and we had to take up every single flooring piece that Nick had put down last week to make sure nothing was damaged now or in the future while we waited for the plumber. We rented a jack-hammer-like tool from Home Depot to get up the flooring underneath everything because it was completely soaked and ruined. Nick came through like a serious hero and saved the day by that afternoon and had everything completely cleaned up and ready for the flooring to be replaced. We were also super thankful to have recently purchased a Wet Vac to help us with everything because we wouldn’t have made it very far without that thing.

We removed all of the new floors that had been laid and made sure they weren’t damaged at all. The timing of this emergency actually worked in our favor, because if we would’ve had the floors laid by the bathroom/hallway downstairs, we would’ve lost all of those floors and the money spent on them too. So, we actually were thankful we hadn’t made progress into those two spaces just yet. Weird how things work out like that, right?

These drinks were definitely deserved as stress levels hit an all-time high getting through the past few days. We had the plumber come out the next day and he had everything repaired as he drained the sewage lines (gross) and got everything back up and running for us. He said this was actually a normal occurrence for homes that sit vacant for a while and then once someone starts using the water in the house–the lines get backed up after things had settled in for so long. We just hadn’t ever run into that problem before even though we’ve always purchase vacant homes. So, it was news to us!

In the meantime, we’ve been staying at Nick’s parent’s house while we wait for the new toilet to be put in place before we use any of the plumbing in the house (just in case!). Luckily, they live right around the corner from us so we’ve been able to get there each night and have a good nights rest–NOT on the floor and NOT in the middle of a plumbing disaster.

So, disaster was our middle name this past week but we’ve successfully made it through. This was by far the worst situation that we’ve had happen in our flip years, and we hope to never have it happen again. Fingers crossed the hard part is behind us on this house and that this week will surely be 10x better than the last. It’s already looking better as we’re getting carpet installed today and Nick is back to re-laying all of our flooring downstairs as I type this out.

I hope you guys had a fabulous weekend and an even better Monday in your world! Let’s catch up again sooner rather than later, k? I’m thankful that this week is looking like things will finally settle and get back to normal and blogging regularly will return again! 🙂

Questions for you today:

Did you watch the Boston Marathon this morning? Who were you rooting for?

Was it rainy where you are this weekend? We had serious storms!